Another quarter gone by, several more major updates to Renditions of the Awakening.
Three new demons have been added! Massive thanks to Shablo5 and his wife for the art and models provided, we now have Croakers added to the game who get along with all previous demons but can't stand to be around Croakers of miss-matched color. 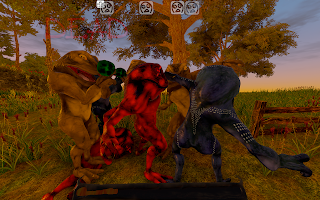 ...Croakers also get buff as they level up, thanks to awesome blendshape work that I wasn't even sure was possible until now. Here's what one looks like at level 10: 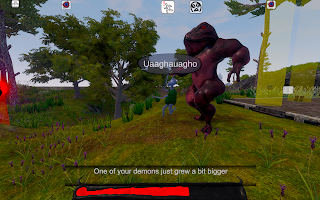 Also, portals are no longer primary found through exploration - instead, chaos generated by demons now fills the Chaos Meter which will spawn you a new portal when full. This significantly improves gameplay - when getting overwhelmed, falling back and regrouping to find some softer targets is now better than running around like crazy "exploring" as fast as you can.
Demon napping is no longer mandatory, so you'll never again be forced to stand still and wait 30 seconds while half your demons recover fatigue and the other half get bored. Combat fatigue will still apply the same slows to a demon as it used to but now they recover fatigue any time they're out of combat, with the option of standing still to let sleepy ones rest and recover fatigue at a much faster rate.
Changes made to demon napping caused an unwanted increase to overall army stability (especially at larger army sizes) so to address this I've introduced a new mechanic: demon racism! Every demon now has at least one other demon type that it hates with a passion, so your chance to get an incompatible demon from a portal increase as your army grows in size / variety.
Updated stealth mechanics cause the keep to gradually increase its panic level from 0 (not aware of any threats) to 4 (maximum fear) as it receives reports from units who saw demons with their own eyes. New behaviors include sending units on scouting missions when panic is low and launching very large attack squads when panic is high.
People will now realize you're the demon summoner and add you to their aggrolist if they see you feed or summon a demon, and their icons will be updated with three red exclamation points to reflect this. When someone carrying this information makes it to the keep, anyone who emerges from that keep afterward will know it too.
RotA can now be installed and updated through the Itch.io app!